* This Fire and Haze Early Warning System is available from April to July.

Haze from forest fires is among Southeast Asia’s most serious environmental problems and there is a clear need for a Fire and Haze Early Warning System (FHEWS) to prevent these fires and mitigate their impacts in the region. APCC developed FHEWS for Borneo Island, the largest island in Asia located at the geographic center of Maritime Southeast Asia, through the Asia-Pacific Network for Global Change Research (APN) project (Yoo et al., 2016). This system shows how seasonal forecasts can be used to predict drought conditions triggering forest fires. It is our hope that the forest fire early warning information in Borneo Island’s four provinces will be utilized to prevent dangerous forest fires and haze. 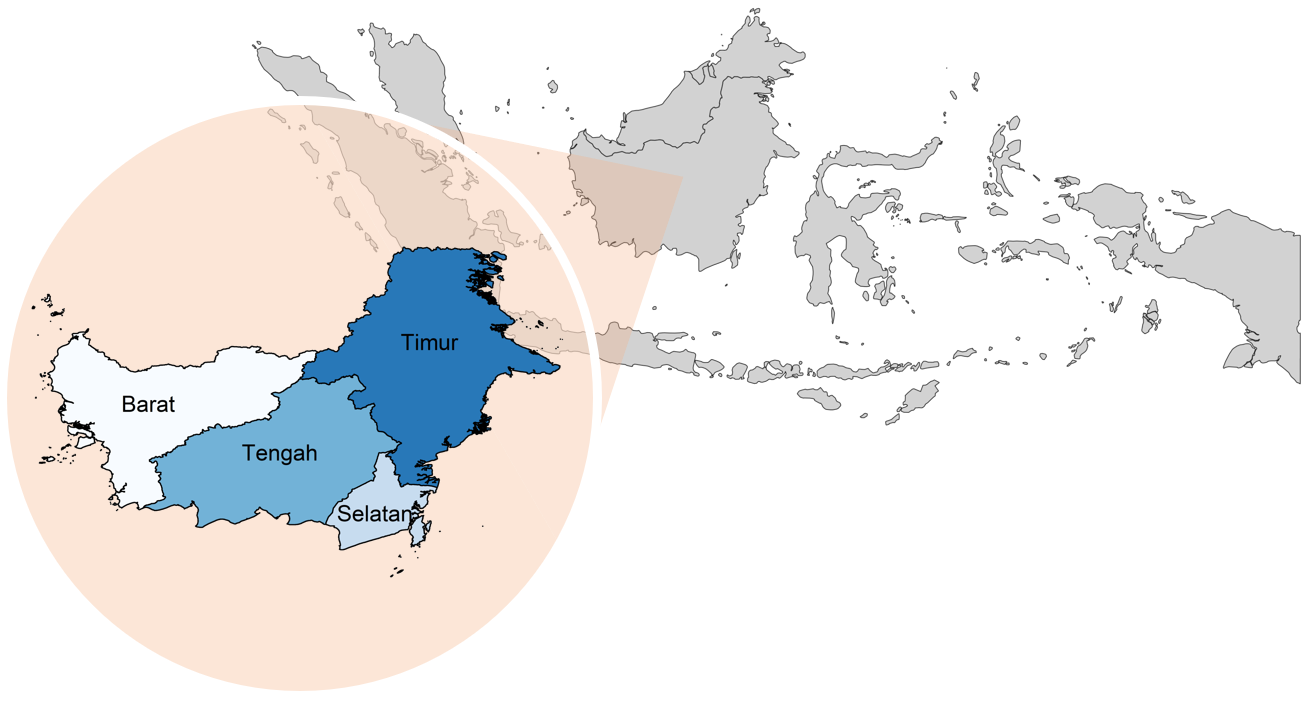 APCC FHEWS provides forecast information on both probability of forest fires and precipitation in Borneo Island’s four provinces for the August to October (ASO) season, when the region has the highest risk for forest fires. This system utilizes the 3-6 month data from multiple dynamic models participating in APCC Multi-Model Ensemble (MME), and therefore is able to generate forecasts for the ASO season starting from April to July. The forecasted precipitation from the APCC MME is translated into four forest fire risk ratings based on the relationship between the precipitation amount and CO2 emissions for each region.

The table above shows the monthly history of the probabilistic forest fire forecast issued in that year. Each cell of the table displays the color and probability value of the risk category with the highest probability among the four categories for each region. This result is able to show the difference in the results of the ASO forest fire forecasts according to lead time. 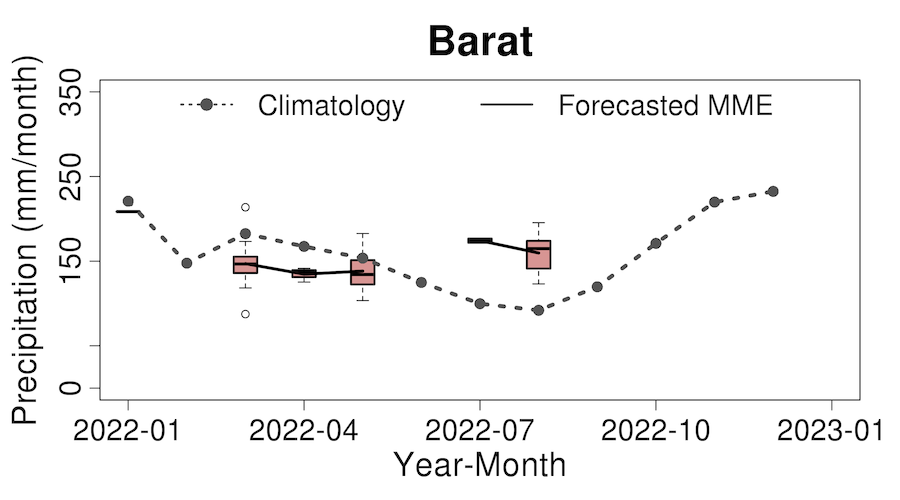 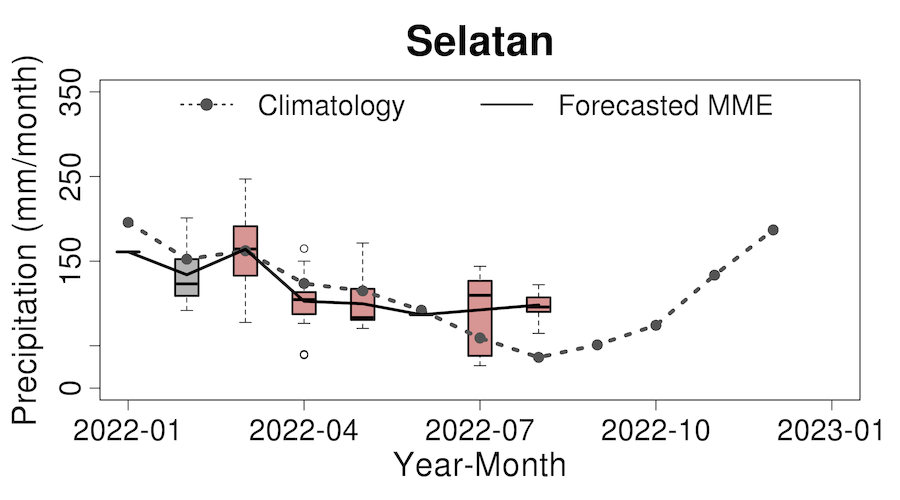 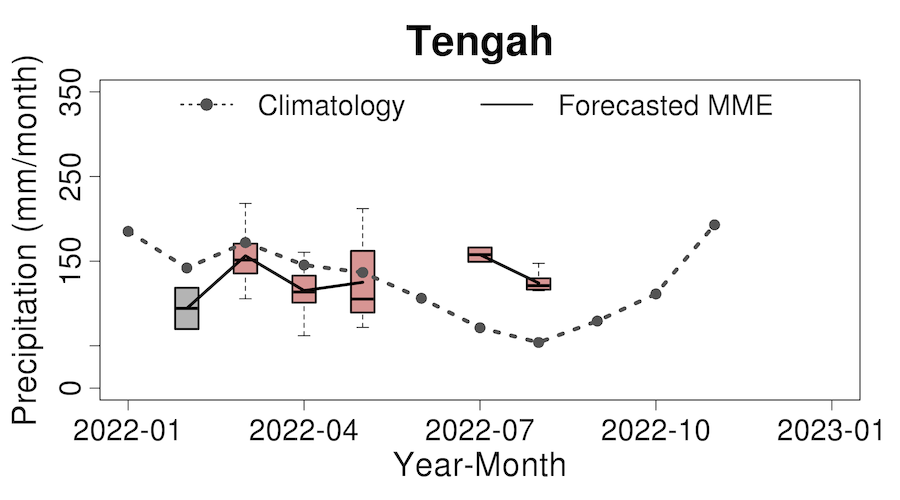 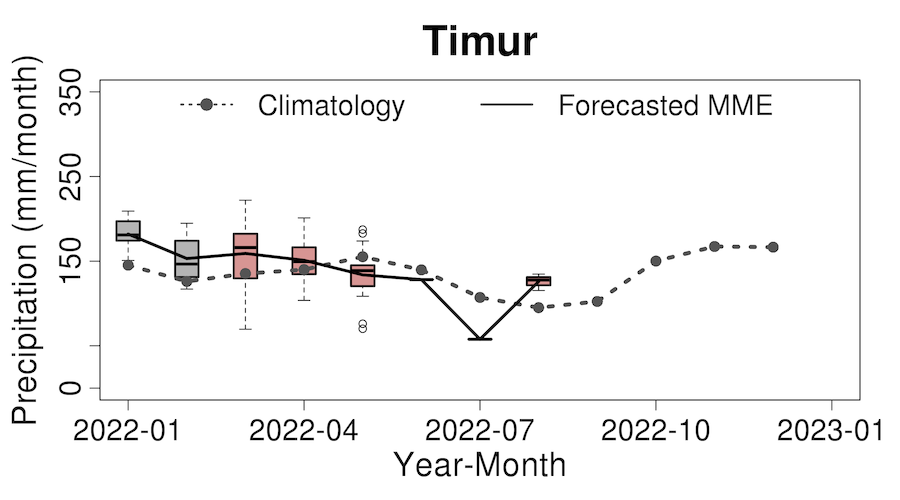 The other result is the forecast information on precipitation from APCC MME. The graph above shows the observed climatology (dotted line, from APHRODITE) and forecasts (solid line, from APCC MME) for monthly mean precipitation in the four provinces of Borneo Island. The boxplot indicates the variations of the predicted values by individual models, and the prediected variations issued in that month are displayed in pink.

The APCC FHEWS was developed by the APN project and more detailed information can be found in the APN project final report (Yoo et al., 2016). The overall procedures for developing the FHEWS are as follows:

We improved the predictability of the downscaling methods, as accurate long-term seasonal forecast information is a key factor for subsequent successful forest fire prediction. Without a high level of confidence in the quality of the downscaled seasonal climate forecasts, we cannot guarantee the efficacy of the FGHEWS results. As a result, the overall seasonal climate forecasting technique for the EWS combines four different downscaling methods according to the degree of using dynamic prediction data produced by global climate models (GCMs). Since predictability on Borneo Island may differ depending on the target month and selected method, predictability was evaluated using the simple average of all available forecast information. 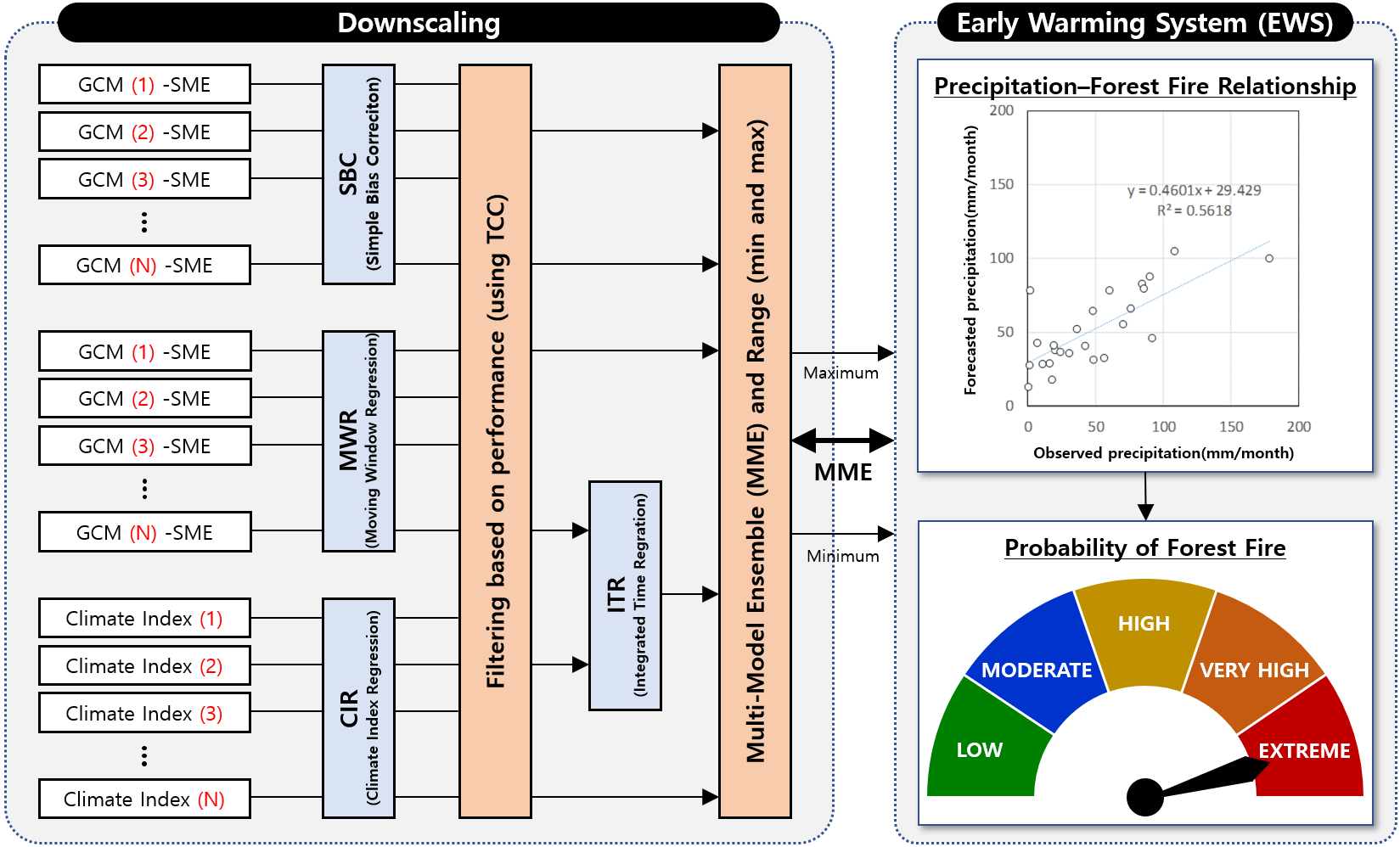 APCC has been collecting monthly precipitation data from multiple dynamic models. Monthly prediction data regridded to 2.5°⨯2.5° resolution based on 13 individual Global Climate Models (GCM) (5 and 8 GCMs with 3-month and 6-month lead forecasts, respectively) were used for bias-correction using the Simple Bias Correction (SBC) method. The table 1 below shows the description of the 13 GCMs used in this FHEWS. 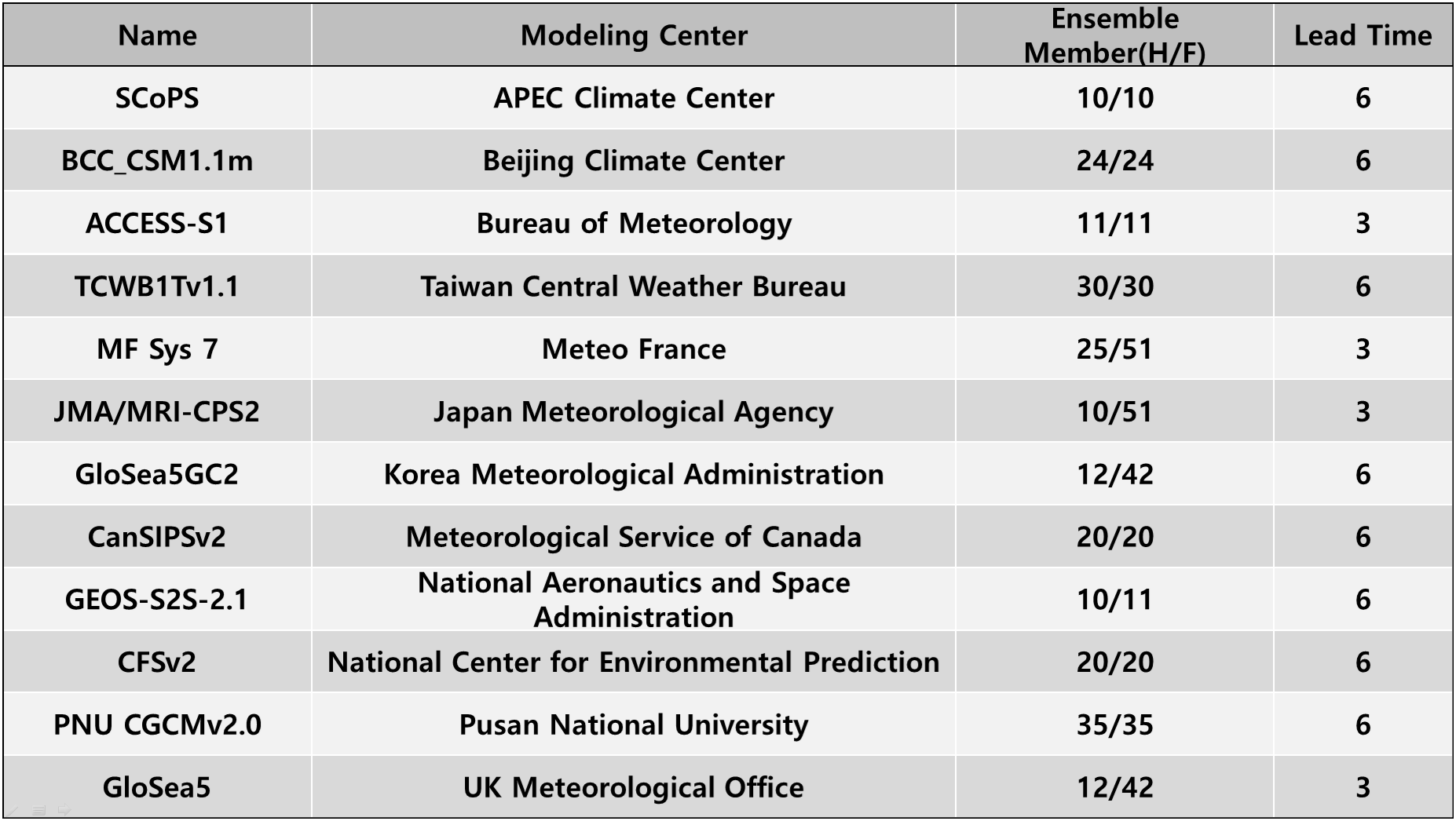 In our system, the SBC method was used to adjust the monthly mean of predicted precipitation by correcting the monthly average of prediction using the average of observations for the same period. The bias-corrected seasonal precipitation forecasts were applied to FHEWS utilizing historical precipitation-fire relationships. APCC developed a forest fire risk rating with four criteria (Low, Moderate, High, and Extreme) for the four provinces in Borneo Island. An analysis of the threshold levels for the study regions was conducted in order to translate the predicted precipitation amount to the forest fire risk ratings. If the forecasted precipitation level dips below the threshold, the FHEWS predicts an increased risk for severe burning, carbon emissions, and transboundary haze. It is important to note that connecting forecasted precipitation to the possible EWS index must be based on region-specific threshold levels. We used the relationship between region-average ASO precipitation and carbon emission data which were derived from APHRODITE’s Water Resources (http://www.chikyu.ac.jp/precip/) and Global Fire Emissions Database (http://www.globalfiredata.org/), respectively. The figure below shows the time series of the 3-month accumulated monthly precipitation and carbon emission levels in the Selatan region (Fig. 2).